Supporting Nowzad and the dogs of Ukraine

PSP Worldwide Logistics has supported the pet charity, Nowzad, with a critical overland delivery of dog food to war-torn Ukraine. We detail the story here, to highlight the important work being done by Nowzad and to encourage donations, so that they can continue to support animals in Ukraine and Afghanistan.

In November 2006 the men of Kilo Company of 42 Commando Royal Marines arrived in the war-torn town of ‘Now Zad’ in Helmand Province. 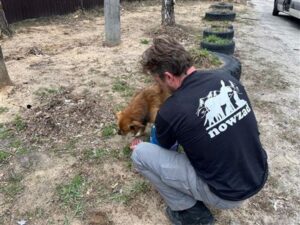 Pen feeding one of the many street dogs in Irpin

Within a short time, one of the many stray dogs that roamed the town had a guardian for the first time; in the form of Sergeant ‘Pen’ Farthing. Farthing sought to bring the dog home to the UK at the end of his deployment, inspiring him to create the animal charity Nowzad Dogs in 2007 and reuniting over 1700 soldiers with the dogs and cats that they rescued and bonded with on the front lines of Afghanistan.

Nowzad staff continue to operate in Afghanistan, re-opening the Nowzad clinic in Kabul and recently opening the country’s first ever donkey sanctuary

The Nestlé pet food brand Purina donated 16 pallets of dog food for the stranded dogs in Maripol. Having struggled to get earlier deliveries through a logistical chain made challenging by the complication of post-Brexit paperwork and the fallout from the P&O ferry suspension. PSP Worldwide Logistics were approached to arranged the transport of the Purina pallets for the Charity’s Lviv branch.

Nowzad is entirely dependent on supporters and fundraisers and with increasing recognition comes more demand for their expert support. You can find out more on their website, or simply go to their donation page and make a difference now.